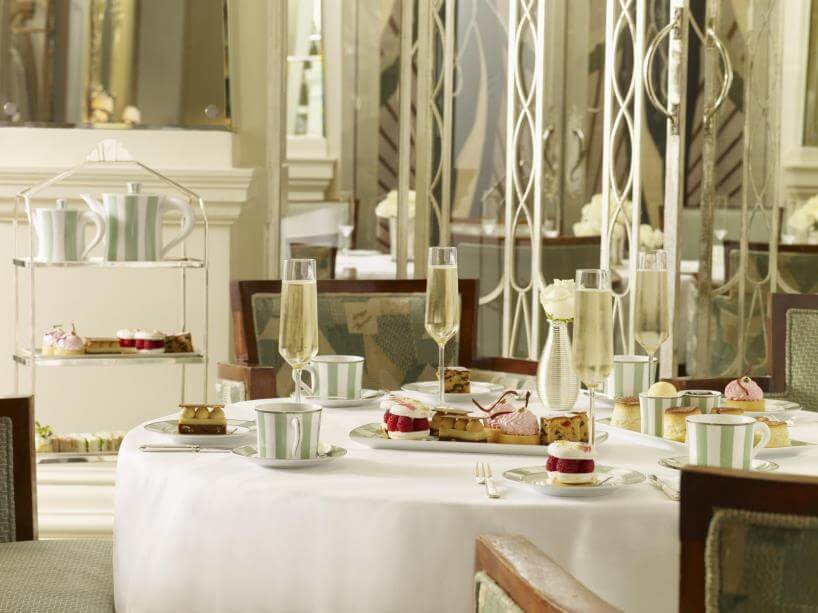 Famous for this most English of institutions for almost 150 years, Claridge’s elevates the
ritual of afternoon tea to a new level with an unprecedented amount of detail and gastronomic
attention.

The unrivalled experience features a menu of over twenty carefully sourced teas,
expertly complemented by delicious finger sandwiches, warm scones and sweet pastries.
The centrepiece of the afternoon tea is, of course, the drink itself. Tea connoisseur, Henrietta
Lovell of the Rare Tea Company has scoured the globe to find a selection of exquisite tea
from small, little known producers, which all use sustainable farming practices. Working
hand in hand with Claridge’s Executive Chef, Martyn Nail, Lovell has painstakingly selected
teas that will complement the food on offer.

The skilfully curated selection has been sourced from some of the oldest tea plantations in
China, Sri Lanka, Africa, India and even the UK. The teas are all natural containing no
additives, preservatives or flavourings. Lovell has also developed a delicious Claridge’s
Blend, which is re-blended every season, much like a fine wine.
Among the highlights of the menu are a White Silver Tip from the mountains of Fujian in far
eastern China and one of the most prized teas in the world; the rare Malawi Antler which is
made from the shoots of the tea plant and cannot be found anywhere else in the UK, and an
Earl Grey from Tregothnan, a walled tea garden in Cornwall that has been producing
beautiful teas since the 14th century.

Following special training all Claridge’s waiters are adept at the correct way to prepare the
perfect cup of tea. The exact amount of tea is weighed before being brought to the table along
with water at the optimum temperature, which is used to steep the tea to the guest’s preferred
strength. Once served, the remaining water is drained off the leaves ready for a second
infusion – which experts regard as being even better than the first.
Commenting on the collaboration, Lovell says: “It’s so wonderful to be working with
somewhere that is synonymous with this culinary tradition and so exciting to know that
Claridge’s serves it with a unique focus on the tea itself.”
Executive chef, Martyn Nail, comments: “Building on Claridge’s afternoon tea heritage,
we’re pleased to be once again setting the standards and raising the bar of this quintessentially
British institution with an amount of detail and gastronomic attention, thus far unheard of in
hotels.”

Tea is accompanied by a delicious selection of finger sandwiches and chic pastries. The
pastries which change every week according to the availability of the very finest seasonal
ingredients and are made fresh each day by a dedicated team of pastry chefs headed by Ross
Sneddon and are complemented by freshly baked plain and raisin scones. The latter are served
with Marco-Polo jelly – the popular tea-infused jam and traditional Cornish, clotted cream.
Afternoon tea is served in the magnificent art deco Foyer and Reading Room on Bernardaud
green and white striped porcelain – which has been made exclusively for Claridge’s. A
classical pianist adds to the elegant atmosphere.