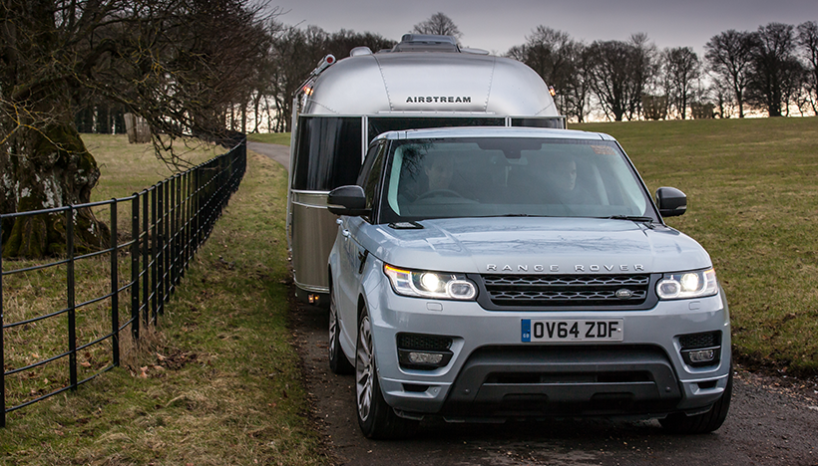 Arctic Circle Journey: Towing an Airstream with a Luxury Vehicle

It’s 7pm at the border of the Arctic Circle, and the temperature has just dipped below -20ºC. This invisible line – at 66º32 – has been crossed by some of the world’s greatest explorers – and now we’re about to join them, having driven 2500 miles from the English midlands. Yes, they have been the hardiest of humankind, brave beyond belief, but none of them have done it like this. ‘Cup of tea?’ my colleague asks. We came here with an Airstream.

The journey starts 10 days earlier near Birmingham in the UK, at Land Rover’s Engineering Centre, where we collect our new Range Rover Sport Hybrid. Our idea is simple: the new hybrid car can tow big loads (up to 3000kg) and operate in low temperatures, attributes rare for a hybrid. So why not test both at the same time, by towing a luxury Airstream 684 to the Arctic Circle? 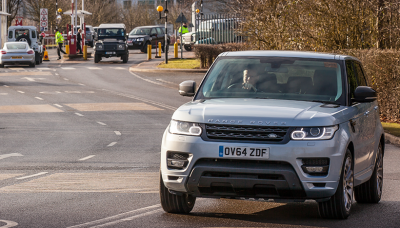 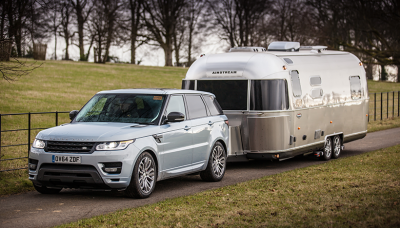 We wave goodbye to Gaydon in all-electric silence. Available in selected regions across the world (although, not the US), the new model combines a 3.0-litre, supercharged SDV6 diesel engine with an electric motor to produce a total of 340PS and 700Nm of torque. Officially, it can average 64L/100km, emitting 169g/km of CO2.

After having driven through France, Belgium and a small slice of the Netherlands, the next morning we arrive in Merenberg, Hesse, at the glistening, aluminium Americana-filled home of Airstream Europe.

Our Airstream 684 is ready for us outside. It’s been specially adapted for the sub-zero adventure: the water pipes are heated and insulated, there’s an on-board gas-fuelled generator for electricity wherever we go, and we’re even trialling a prototype gas bottle warmer. Other than that, this is a standard, luxurious Airstream. At the front end, the U-shaped lounge is upholstered in soft, red leather upholstery, from where you can watch one of the two satellite TVs (the other’s in the rear bedroom). The kitchen is smart and modern, with a solid Corian gallery worktop. Drawers close softly, while cupboards shut with a reassuring clunk. Everything feels solid and of the finest hand-built quality.

European Airstreams differ to American ones, although both are built on the same production line in Jackson Center, Ohio, where Airstream has been building its iconic trailers for 84 years. The riveted aluminium aircraft-construction body is shared, as are the construction methods, but the European and US markets have their differences – European trailers are slightly narrower, roughly 20-30 per cent lighter, have wider beds, and are fully homologated for all of Europe.

Our first overnight stop is at Camping & Ferienpark Falkensteinsee, near Hamburg. It’s 0ºC on our first morning, and we already feel cold. But a breakfast of porridge and heady coffee – all created on the four-ring hob inside the Airstream – soon warms us all up.

Our aim for the day is to drive to Padborg Park race circuit in Denmark. Alas, when we arrive it’s completely covered in snow. But then again, there aren’t many hybrid cars that could tow 2500kg of Airstream to a snow-covered race circuit and complete a lap – we probably even set a niche lap record.

That night, my colleague stays in the Airstream, while the photographer and I stay at a nearby bed and breakfast. Come morning, my colleague is by far the most awake out of us all, beaming as we start to waken up over breakfast. But soon the conversation becomes more sombre, and brows furrow as we realise that the tail-end of Hurricane Ole is passing over – and today we’ll be crossing gargantuan bridges through Denmark, including the mighty Øresund Link that connects Copenhagen with Malmö in Sweden. 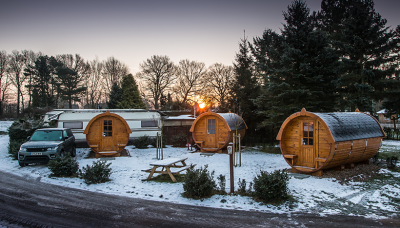 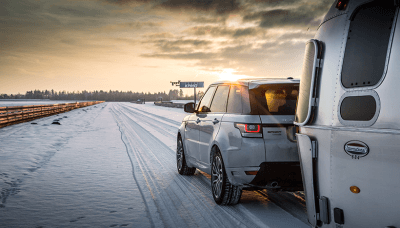 We arrive at First Camp Malmö unruffled in the afternoon – the car and Airstream are inherently stable, and feel rock solid. The Range Rover Sport has Trailer Stability Assist – but there wasn’t even a flicker of intervention. The weight of both car and trailer, even balance, and slippery aerodynamics combine to fight off any strong winds.

We spend the evening relaxing around the table with food and drink, listening to music on the Airstream’s in-built stereo system. This is what big adventures are about, and it’s a chilled-out end to a long day.

The next morning starts badly when I walk into a signpost, but a bit of shouting helps to clear the pain, and we’re on the road.

The first stop is Gothenburg, Sweden’s second city after the capital Stockholm. The picturesque and historical port is a hub for education, industry and culture. We drive into Haga, one of the city’s oldest districts, in EV mode. Under normal driving, the electric motor helps to fill in torque lower in the rev range, but at urban speeds the car can run solely in electric. Pedestrians, who fill the bustling, narrow and cobbled streets, pause to take in the spectacle.

After Gothenburg, the long days begin and that night we rest at Krono Camping in Lidkoping, next to Lake Vänern. It’s the largest lake in Western Europe – about 16 times the size of Yellowstone Lake in America, or 100 times the size of Loch Ness in Scotland. Not so surprisingly, we’re the only caravan there. The snow is thick, the air is freezing, yet come sunrise the sky is clear and the surroundings beautiful.

By lunchtime, we’re back on the road en route to SweCamp Flottsbro near Stockholm, and arrive in the early evening, where two inches of snow mask a layer of slippery ice. Just a week earlier, the country had been covered in a thick duvet of snow, prompting a weather warning from the national weather agency – warnings reserved only for when the conditions could become dangerous. Bearing in mind Sweden is well used to snow, it shows just how precarious it became when, at the start of February, 43 accidents were reported in Stockholm alone in the space of six hours. 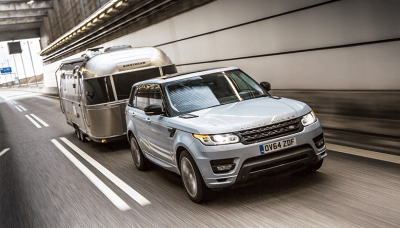 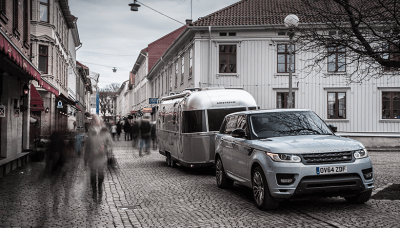 Thankfully, mercifully, the conditions are much kinder by the time we arrive, and our next move is to get studded tyres fitted in Stockholm. Despite the weather warnings and the vast amount of snow around us, we doubt whether we will really need them. Plus, on normal roads, studded tyres produce a crackling sound that’s noticeable at lower speeds, as though pressing the brake has filled the exhaust with popping candy.

That evening we arrive at the Rullsand campsite near Gävle, north of Stockholm. The approaching road is translucent with thick ice – ice that has thawed and refrozen. Setting up the Airstream takes longer than usual – for half an hour we shuffle and slip across the ice like penguins with haemorrhoids, terrified to stretch too far. Every so often, one of us lets out a frightened shriek. I try to get inside the car, but am immediately stumped as I realise that pulling the handle requires more force than my boots’ grip allows.

Morning justifies it all, with spectacular views across the Gulf of Bothnia. According to Anna and Mathias, the beaming and lovely couple who run the campsite, visitors flood the area in the summer, thanks to the big, golden beaches and stunning views. In one day alone, 1000 people visit their on-site restaurant. But right now, it’s the reserve of weekend campers – who site their caravans here for the winter season – and, well, us, some weird English gents who thought it would be a good idea to drive 2500 miles to the Arctic Circle to make a point.

We set off north, settling into a rhythm, stopping off inland near Solleftea, before heading back out along the coast and then in again. Towns become more industrial, the landscape more rugged and intimidating. We’re soon driving through vast areas of forest, and soon the industrial towns make way for small villages, separated by more forest and plains. The roads begin to get icy, with sporadic and big patches of matt white making the outside lane a dangerous place to venture. When we arrive in Blattniksele – roughly level with Pitea on the coast – it’s about -10ºC. We’re all shattered, but trying to keep spirits high is painful, simply because smiling hurts. It’s like filling your mouth with ice cream after a bowl of hot soup.

The conditions aren’t brutal, but they’re unforgiving, and we’ve been spoilt. With two Range Rover Sports – the hybrid towing, the other acting as a support and photography car – we’ve been able to fine-tune our temperatures thanks to the dual-zone climate control (I found 22 centigrade/71 farenheit to be about right. Or perhaps 21.5C/70F. Either or, really), and remain constantly comfortable. For long journeys in treacherous conditions, it’s hard to imagine a better car for the job. 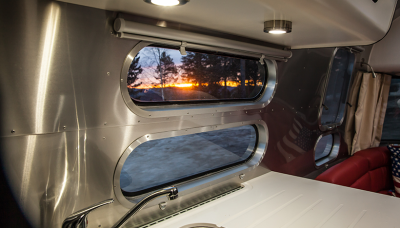 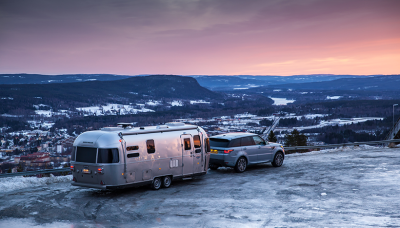 Our penultimate destination is the small town of Arjeplog, where ice lakes are at the centre of its economic survival. This is where Land Rover, along with the world’s other biggest manufacturers, do the bulk of their winter testing. Each year, the town’s population of 2500 doubles to 5000 because of all the engineers that come in. One of the hotels there is open only for the car-testing season, from the end of November until the end of March. Seeing camouflaged cars pulling into supermarket car parks almost seems normal. Almost.

For the final stint, we set off in convoy, as we have done for the past 2450 miles. It’s testament to the stability of the car and Airstream that they feel so comfortable to be driven at 90kmh on winding main roads on thick ice. Then again, the lakes of Arjeplog is where this car was developed.

The car just grips, and the trailer obeys, with plumes of dusty snow billowing out from beneath the Airstream. Think of the great misty vortexes that are pushed out from beneath a jumbo jet as it lands, and you’ll get an idea of what I saw in my mirrors.

After 90 minutes of driving, we turn into the modest layby where the normal world stops and the Arctic Circle begins. The sun has set and the thermometer reads -20C.

We’ve driven 2500 miles through seven countries in 10 days, through gale-force winds and along ice, towing an Airstream all of the way in a brand-new Range Rover Sport Hybrid that made every mile as effortless as it was luxurious. As we stand there, hot mugs of tea in hand, my colleague sums it up perfectly: ‘We made it,’ he says. ‘We actually made it … But God it’s cold.’ 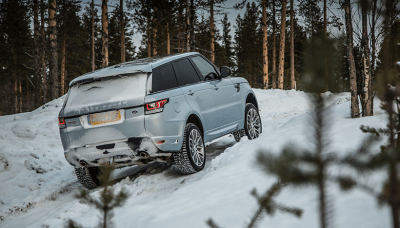 Gold or Silver? Which is the UK’s Favourite Metal?Read the article
Types of Organic Food and Snacks That Everyone Should TryRead the article
The Most Luxurious Destinations for a Post-Lockdown GetawayRead the article
4 Essential Tips for Styling a WatchRead the article
Famous Jewelry Artists & The Multi-Billion Dollar Businesses They FoundedRead the article
What Every Luxury Home Needs To Have In 2021Read the article
© Copyright 2021 AI Global Media Ltd. All Rights Reserved.
Privacy Policy | Cookie Policy | Terms and Conditions of Sale | Website Terms of Use