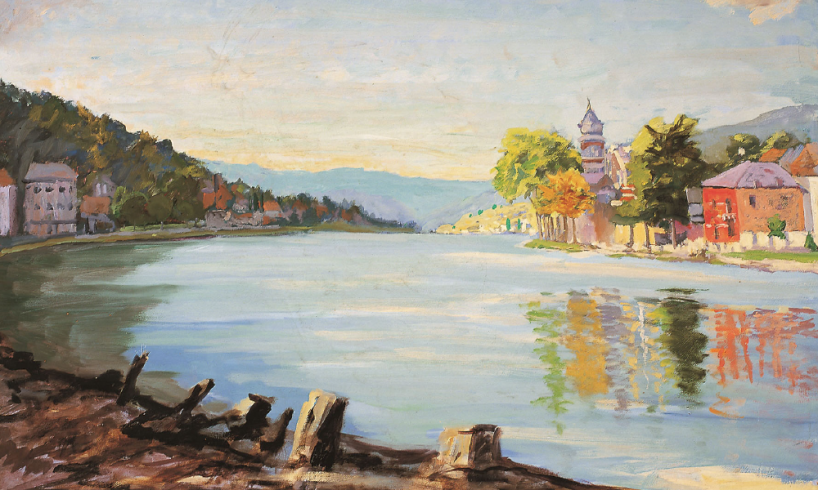 Last year, following the death of his daughter and last surviving child, Lady Soames, her Executors offered 37 of Churchill’s paintings to the nations, which have now been accepted in satisfaction of inheritance tax arising on her estate.

Winston Churchill was not only an inspirational Prime Minister during the Second World War but a highly talented amateur artist. As Mary Soames wrote of her father, “ …in his 41st year [1915] painting literally ‘grabbed’ him, thereafter playing an increasing and abiding role in his life, renewing the source of his great inner strength and enabling him to face storms, ride out depressions and rise above the tough passages in his political life.” Painting was a pleasure and a relaxation which he enjoyed well into his 80s and he produced over 500 works. The paintings accepted in lieu span Churchill’s artistic career and range from 1915 to the late 1950s.

Culture Minister Ed Vaizey said: “It is fitting that in the fiftieth year since his death these paintings by the great war-time leader Sir Winston Churchill will be displayed in three very significant locations that helped shape his life and gives us an opportunity to appreciate the artistic talent of a man who was a colossal figure in world politics.”

35 of the paintings have been allocated to the National Trust and will remain at Chartwell, the family home in Kent which opened to the public in 1966. Chartwell now welcomes 200,000 visitors a year from all over the world.

Two other paintings have been allocated to the two places which were the centre of Churchill’s life as a statesman and politician. One will hang in the Houses of Parliament and the other is in the Churchill War Rooms. The allocation of the paintings reflects the intentions of Lady Soames who had placed all of these paintings on loan to these three places during her lifetime.

Edward Harley, Chairman of the Acceptance in Lieu Panel, which advises Government on offers in lieu said, “The opportunity to ensure that visitors to Chartwell can continue to appreciate Churchill in all his many aspects by seeing his paintings in the house and the studio comes at a very appropriate moment. Fifty years after his death and seventy years after the end of the War, Churchill remains one of this nation’s greatest figures. His paintings let us see the man in the round and not just as a great politician.”