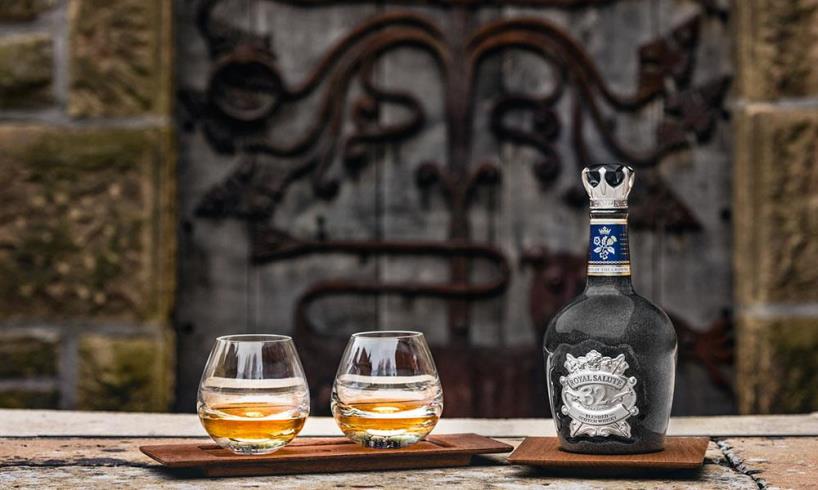 Royal Salute is a brand steeped in tradition and prestige. First launched in commemoration of the coronation of Queen Elizabeth II in 1953, the Speyside-based brand established themselves with a very clear homage. In reflection of the traditional 21-gun salute, Royal Salute Whisky is aged for a minimum of 21 years. Now, after more than 50 years of producing some of the world’s finest whisky, distilled and produced in Keith, Moray, adds a new feather to their shako, in the form of an exuberant, permanent expression of celebration to the modern British Monarchy.

Most recently, Royal Salute arrested the attentions of whisky lovers with their new signature brand, the 21-Year-Old whisky first brewed in celebration of the coronation in 1953. Its devotion to historical heritage is clear to see from the outset – its flagon, fashioned from Wade porcelain, is wrapped delicately in a royal blue shroud, held in place by fine leather; the cap is inscribed with a heraldic cross pattée; the bottle itself incorporates the image of Robert the Bruce, alongside a Gaelic inscription that translates to ‘fidelity, stability since 1801’.

The celebration of both English and Scottish heritage is evident in this bottle, in particular its allusion to the events of 1801. The prospect of war with the French Revolutionary Republic became a sudden and very real possibility when Ireland, which at the time was rebelling against direct British rule, came under invasion from an army led by the famous General Louis Lazare Hoche in 1798. In the bloody aftermath, and especially in the prelude to Napoleon de Buonaparte’s creation of the French Empire, the drive for closer ties between England and Scotland meant that United Kingdom became realised through the Acts of Union 1801. This whisky, with its motif of Robert the Bruce and celebration of the English Monarch, is a call-back to a time of great unity in the face of adversity, a steadfast message that bears some relevance in today’s climate of Scotland’s question over independence.

Now, though, the firm renowned for its exceptionally crafted and aged Scotch whisky has unveiled the new Royal Salute 32-Year-Old Union of the Crowns, which invokes another time of heightened tensions in the British Isles that further underpin the unbreakable bond between Scotland and England.

Royal Salute 32-Year-Old Union of the Crowns pays tribute to the events of 1603, when King James VI fused three mighty kingdoms to create the modern British Monarchy after the death of the childless Elizabeth I. Reflecting the significance of this historical event, the rare single malts in Royal Salute 32-Year-Old Union of the Crowns exemplify the power of unity, combining precious whiskies to create an incredible experience that can boast to be greater than the sum of its parts.

This new exquisite blend unites precious single malt and grain whiskies aged for a minimum of 32 years, a further 11 on top of its minimum of 21. Celebrating the creation of the modern British Monarchy is the source of the brand’s inspiration and values, and this passionate expression will appeal to aficionados looking for a rare whisky experience that will be available exclusively through global travel retail.

Exceptional whiskies aged for over 32 years have been hand-selected from some of the best distilleries in Scotland, such as: Longmorn with its creamy texture; the characteristically fruity Glen Keith; the sweetness of Tormore and the richness of Braeval as well as long-since closed distilleries – Lochside and Caperdonich. With all of these elements combined the final expression offers a rich and fruity nose with flavours of soft caramel toffee, dark chocolate and orange with a touch of ginger cake.

Reflecting the rare liquid within, Royal Salute 32-Year-Old Union of the Crowns is presented in an elegant porcelain flagon, made from the purest clay, water and tempered fire. The flagon, which takes ten days to make at the hands of highly skilled craftsmen, is embossed with a distinguished hand-hammered silver plaque, while a black stone set on a silver crown tops the bottle.

Each bottle is unique, with the glaze giving every flagon an individual patina – the result of a secret firing process. The story of the Union of the Crowns is brought elegantly to life through the flagon’s long neck, which is decorated with a rose, a thistle and a shamrock.

Peter Moore, Prestige Brand Director at Chivas Brothers, commented, “we are very pleased to present Royal Salute 32-Year-Old Union of the Crowns, a truly precious blend of aged whiskies. This unique Scotch unites the timeless tradition of our skills and history with a contemporary understanding of the whisky experience preferred by today’s discerning spirits drinkers. The British Monarchy has been at the heart of the brand since its foundation in 1953 and, as a true representation of the exquisite craft of the Royal Salute blending team, we expect this new expression to become a sought-after collector’s item for international travellers.”

Royal Salute 32-Year-Old Union of the Crowns will be available in global travel retail from October 2016 at an RRP of 380 USD or local equivalent.