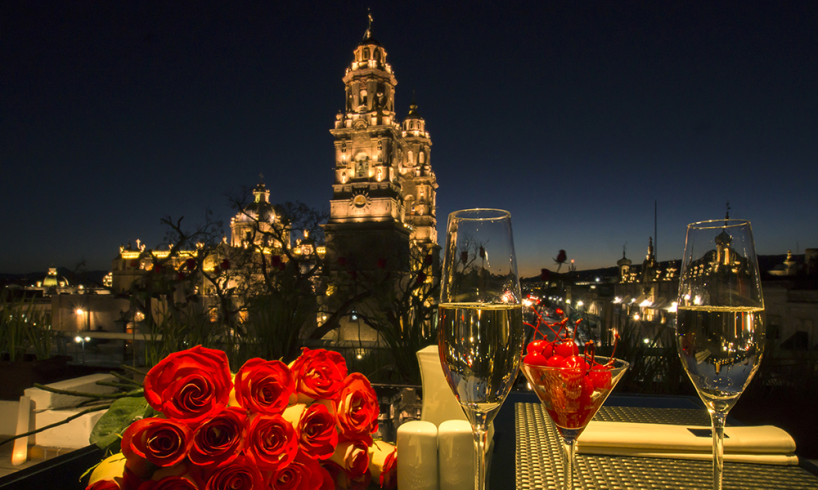 Los Juaninos Hotel has been described as a 17th century noble palace, located in Morelia’s historic centre, Mexico. Selected as part of LUX’s Ones to Watch in Hotel & Spas, we took the opportunity to interview the hotel’s general manager, Lorena Morales to learn about this superb hotel and its rich history.

Originally a 17th-century noble palace, Los Juaninos was converted into a superb 30-room hotel in 1998 when it was renovated with all modern facilities and comforts. The hotel’s general manager, Lorena Morales tells us about the architectural significance of the hotel and its marvellous location.

“Yet this landmark building faithfully retains its architectural grandeur, harmonising with surrounding Spanish colonial buildings of Morelia’s historic centre which, in its entirety, is designated a UNESCO World Heritage Site. According to UNESCO, these aristocratic buildings: ‘reflects the town’s architectural history, revealing a masterly and eclectic blend of the medieval spirit with Renaissance, Baroque and neoclassical elements’.

“The hotel’s impressive facade and lobby, thick stone walls, graceful stairways and arched hallways combine with guestrooms and suites, each one distinct, forming an ambience reminiscent of Morelia’s glorious past.

“Balconied windows have breath-taking close-up views of Morelia’s cathedral: the varying shades of its pink quarry stone facade by day; glowing magnificently at dusk and dramatically illuminated at night. The city’s tree-lined main square is just across the street, a vibrant setting in the heart of Morelia, capital of the State of Michoacan.”

At the end of the seventeenth century, the Captain General of New Spain and Bishop Juan Ortega y Montañez ordered the construction of the opulent Bishop’s Palace in this privileged location of Morelia. Lorena goes on to tell us more about the hotel’s fascinating history.

“Then, in 1700, the Bishop granted the building to the religious order of Los Juaninos who converted it into the Royal Hospital of San Juan de Dios which they maintained for over a century. In 1857, the building was sold to private individuals, and in 1886 it was transformed by architect Guillermo Wotton de Corinne, influenced by fashionable romantic architectural style, into the most luxurious hotel of the period, the Hotel Oseguera. It catered to first-class passengers traveling on the new railway from Mexico City to Morelia.

“Finally, in 1998 the building was restored to its original splendour and reopened as the Hotel Los Juaninos, with its antique French furnishings, rich fabrics, and art-nouveau stained-glass windows, as well as modern facilities including an elevator. Hotel Los Juaninos has continually undergone renovations and enhancements during the past decade.

“Morelia has played an important role in the history of Mexico. It was the birthplace of several heroes of the Mexican Independence, September 16, 1810, a date that is celebrated spectacularly here.”

Lorena then details the stylish rooms and suites on offer, indeed in this regard there are 30 distinct experiences to enjoy in this regard. She also tells us about the strong reputation of the Restaurante La Azotea.

“Individually designed and decorated in meticulous detail, guestrooms preserve stylish elements of the former 19th century hotel such as original doors, windows, ceilings, arches and even certain bathroom fixtures such as European bathtubs. Many rooms have impressive views of the cathedral and the historic centre of Morelia. Our balconies indeed have a ‘view back into history’.

“Hotel Juaninos’ La Azotea Restaurant is famed for its dazzling close-up views of the cathedral, amazing by day and magnificently illuminated at night. In a stylish setting of modern decor, the atmosphere is casual and service is welcoming and caring.

“La Azotea Restaurant specialises in contemporary Mexican gastronomy with a fusion of Michoacán’s own regional cuisine. The restaurant’s menu of the day presents culinary delights that evoke nostalgia because they are based on precious traditional recipes of our ancestors.

“There is an extensive selection of Mexican and imported wines. A private dining room seating up to 20 persons is available for special events such as weddings or business meetings. The restaurant is open from 8 am to 11 pm daily.”

Finally, Lorena highlights the ambience of the hotel’s Terraza Bar La Azotea, which is in keeping with all the other facilities that are available in this very fine establishment.

“Enjoy the congenial, casual atmosphere and fashionable feel of our rooftop bar and lounge overlooking Morelia’s colonial historic centre. The view of the cathedral is extraordinary, especially in the evening: While the sun is setting, the cathedral simultaneously begins to glow and finally at sundown it becomes dramatically illuminated.

“Don’t miss the spectacular sunsets at La Azote. We serve complimentary snacks every evening from 7:30 pm until 8:30. From 1:00 in the afternoon, we serve a variety of authentic Mexican botanas(appetisers). They range from a delicious taquiza (build your own taco from an array of ingredients) to a shrimp consommé.

“On Friday nights at 10 pm, enjoy live music of the Trova y Canto Nuevo group. Saturday nights are festive with DJ Said G, reminiscing music and retro videos from the 70s, 80s and 90s, or listening to Alternative Pop. Excellent selection of fine wines and liquors.”