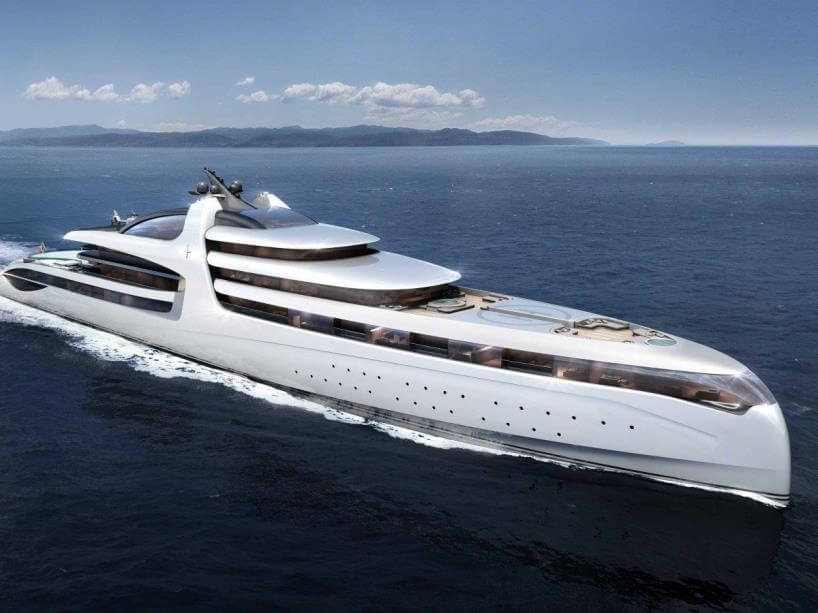 The design for a new, colossal super yacht has been released, which combines modern, sleek styling with customer centred features.

Dobroserdov Design, in collaboration with The Italian Sea Group, have created a stunning new design for a super yacht, the Admiral X-Force 145. If constructed this vessel will become the world’s most expensive yacht. The Admiral Yacht website states that the yacht is priced by request, but the design clearly surpasses anything ever fathomed before and the scale of the yacht will easily eclipse most boat yard pleasure cruisers.

Externally, the yacht is constructed of smooth, curved lines and expansive glass panels. The top deck holds two helicopter pads, and the hull can be illuminated by lights at night. If constructed, the yacht would be luxuriously fitted internally, with the stunning centrepiece consisting of a colossal dropping crystal chandelier encircled by two spiral staircases and towering over an ornamental indoor pond with two glass sculptures snaking out of the centre.

The designers have combined stunning visual effects with comfort and modern fittings, with the central water feature surrounded by a plush seating area. One half of the Admiral X-Force 145’s deck is dedicated for the supreme use of the owner, with guests being able to avail themselves of balconies, a forward observation deck with panoramic windows and solid marble floors. All of these features highlight the designer’s acknowledgement of their customer’s needs and comforts.

The designs have an appearance of a grand hotel, with futuristic metallic fittings and furnishings giving the concept a sleek, modern appearance. The yacht will also contain two vast swimming pools, a spa, multiple cinemas, a car garage and two sets gym facilities, which highlight the self-contained luxury available on board the Admiral X-Force 145, which will measure an astonishing 465-foot in length. This vessel will, if completed, be a physical representation of the power of money.