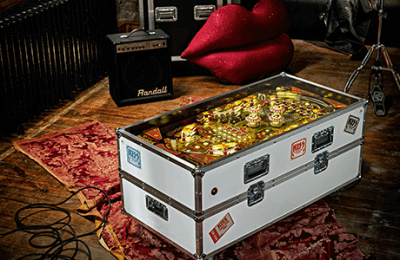 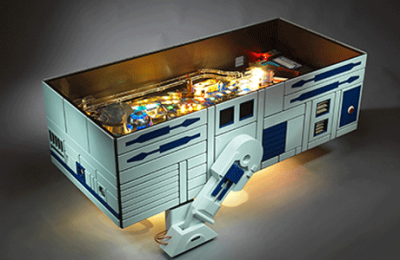 In the corner of a small workshop in Budapest, near the Megyeri Bridge over the Danube, a modest man is hunched over a bench, putting the finishing touches to a coffee table that ‘beeps’ and ‘broops’ like Star Wars favourite R2-D2. The man is a quiet Transylvanian called Ernő Balogh, who once made church organs but now crafts remarkable coffee tables from old pinball machines.

Watching him is the visionary behind these amazing pieces of furniture, András Lacfi, a 41-year-old marketing expert with a love of rock music, scuba and, of course, pinball machines.

‘I figured that turning it into a coffee table would both save it and give me an excellent excuse to stick it in the living room. The table was based on the Great Chicago Fire of 1871 and, once it was complete, my wife Tilda wondered if other people might be as captivated as we were by these creations.’

Two more tables were made, Ernő was hired full time and ALTAR was launched last year. In just two years, the complexity of the tables has grown hugely. Some are decorated with pages from classic books, others have built-in projectors. The machines on which these eye-catching tables are based all have one thing in common – all of them are retired, and all of them are getting the chance to enjoy a new existence as high-end furniture, rather than functioning pinball machines.

‘We love pinball,’ says András, ‘and it would break our hearts to have to use a working machine.’

Sourcing the machines is a huge job in itself – some come from the internet, some from deals at the side of the road and others are just ‘stumbled upon’. One donor machine survived the Balkan war, stored under plastic sheeting in a carpark after the arcade it had previously lived in was bombed. Each table has a story attached to it, and no two tables are identical. If you want one, be prepared to spend upwards of £6,000 – excluding the cost of the original machine.

The tables are building a cult following, and the ‘R2-D2’ style piece, called The Droid, recently went viral on the internet.

András says: ‘We know people either love or hate these tables at first sight – it tends to be a real “Marmite” reaction. And that’s ok – we don’t make many and we’d rather have someone saying they hated our work than having them shrug their shoulders and ignore it.

‘For those that fall in love with the furniture, there are always new treats in store, because we lavish so much attention on each creation, adding details and building features that we can’t buy elsewhere. Ernő is responsible for maybe 90 per cent of each of our creations. Because he used to make church organs, he literally has a religious attention to detail. He’s only 40 and he never seems to rest: in his spare time, he builds guitar amps.’

‘One day, we’ll use his organ building skills and make a table with a real, working organ in it, one that you can see the workings of. Why not? Wouldn’t that be an amazing piece of furniture in any room?’

Talking to András about Ernő and church organs, you will hear religion referenced again and again.

‘We give these pinball tables a second lease of life, in effect bring them back from the dead,’ he adds. ‘That, coupled with our religious attention to detail, helps to explain why we called the range Arcade Resurrection. I know, it’s not so subtle, but the tables aren’t exactly subtle either!’

So you want to own one of these creations? First thing you’ll have to do is chat with the ALTAR team to find out what you like and what interests you. András says: ‘If you’re going to buy a bespoke table from us, we want you to utterly adore the finished creation. We need to know what makes you tick – firstly, so we make a table that you’ll be extremely happy with, and secondly, so we don’t waste our own time finding materials and parts that won’t be appreciated.’

‘We’ll spend weeks sourcing the right parts, if we have to, to make the finished piece utterly amazing – from movie memorabilia to gambling chips from an old casino. For one table, we had to source dilithium crystals… even though they don’t exist, except in the minds of Star Trek fans. And you know what, we managed. We like to think that anything is possible when we are building our ALTAR masterpieces!’

If you’ve ordered a bespoke table, don’t expect it to be delivered the following morning. Each piece takes between 200 and 350 hours to complete.

András says: ‘We work hard to ensure we know what the client will like. But then we get creative, because that’s one of the things that makes these pieces so amazing.

‘And we do like to keep as much of the creative process as possible to ourselves – we’re bad like that!’

For more details, go to www.altars.co