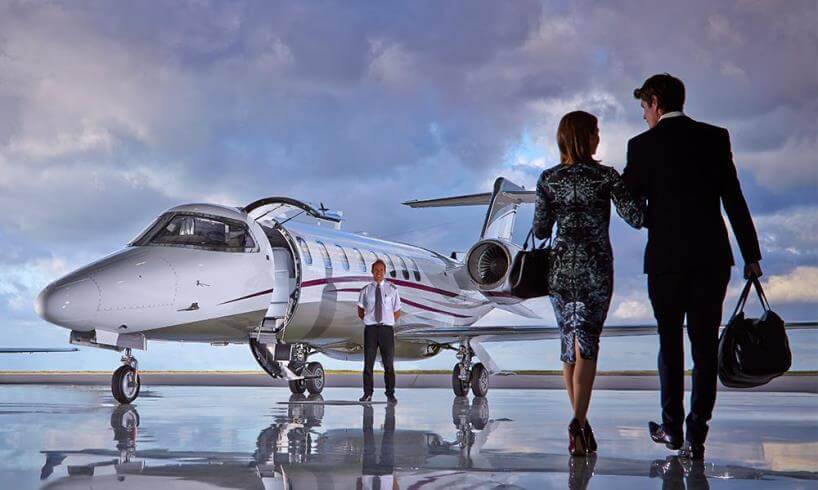 Bombardier Business Aircraft announced today that Zenith Aviation, Britain’s leading bespoke charter service provider, will take delivery of two brand new Learjet 75 aircraft. Having just added these new entries to their charter fleet, it’s fair to say that Zenith Aviation are pretty excited about their prospects for 2017. The stunning new aircraft, with an approximate combined value of a cool £30m, have Satcom and Wi-Fi facilities as well as an in-flight entertainment system in each of the eight on-board seats.

“We are delighted to be once again working with Bombardier and welcoming the Learjet 75 aircraft into our fleet – the Learjet brand is synonymous with our facility at London Biggin Hill,” said Stuart Mulholland, Managing Director of Zenith Aviation Ltd. “Having seen the first Learjet 45 aircraft arrive over 17 years ago, we are now very much looking forward to having the iconic Learjet 75 business jet.

“The new jets are sure to be a hit with our charter customers as they bring a new sense of luxury to the existing fleet”, Stuart continued. “It’s been a stellar year for us, with significant growth and charter activity continuing to greatly outweigh that of previous years. I would expect to end the year having flown around 250 per cent more hours than last year, with other areas of our business also having seen significant growth.”

The business marked the arrival of its two new Learjet 75 aircraft with a prestigious High Net Worth event at London Biggin Hill’s Bombardier hangar, not only showcasing the sophistication of private aviation but also bringing together a melee of other luxury attractions including vintage Ferraris, vintage shotguns, exclusive fine jewellery by G. Collins & Sons, personal jeweller to Her Majesty, The Queen and the yet-to-be-released Aston Martin DB11 Coupé.

He continued, “London Biggin Hill Airport is a fantastic location which is why, in the last couple of weeks, we have also completed the purchase of a hangar next door to our current property at Biggin Hill, which will enable us to further develop our engineering business at the airport. Our customers are looking for a bespoke service and naturally, an exceptional experience but they are also looking for convenience as they are often time poor. With the new Learjets and the hangar we are in the perfect position to provide both to those seeking that A-list lifestyle, on the edge of London.”

The Learjet 75 jet features the pioneering Bombardier Vision flight deck with an interior designed for style and comfort. It is the only business jet in its class to feature an eight-seat double-club configuration with a flat floor throughout the cabin and plenty of leg room. The Learjet 75 aircraft is also available in a six-seat executive configuration, offering enhanced comfort and productivity features.

Its more powerful engines and new winglet design enables it to cruise at a speed of Mach 0.81* and climb to an operating ceiling of 51,000 ft. (15,545 m). The Learjet 75 can also achieve an exceptional range greater than 2,000 NM (3,704 km). Its modern interior features a new cabin management system with individual touchscreen monitors and full audio and video control; LED lighting throughout the entire aircraft; a generous baggage suite and a spacious galley to optimize catering. The Learjet 75 aircraft can fly four passengers and two crew members non-stop from London to Moscow.

“We’ve had a hugely successful year for our business and this expansion is a key part of our growth and development strategy moving forward. We are anticipating growing our fleet of managed aircraft and further development of our facilities, and also adding to our Part 145 capability at Biggin Hill Airport over the coming months.”

The new charter aircraft arrived at Biggin Hill Airport last week. This will mark a significant upgrade in Zenith Aviation’s aircraft charter offering following its move to offer worldwide flights alongside shorter charters to Europe at the beginning of the year. Both aircraft will be managed and chartered by Zenith and are set to join the company’s fleet in the coming weeks.

“The Learjet 75 aircraft offers class-leading performance and continues to set the benchmark among private jets in the Light category,” said David Coleal, President, Bombardier Business Aircraft. “We look forward to working with Zenith Aviation and are thrilled that they have selected the Learjet 75 aircraft to join their growing fleet.”

Bombardier is the world’s leading manufacturer of both planes and trains. Looking far ahead while delivering today, Bombardier is evolving mobility worldwide by answering the call for more efficient, sustainable and enjoyable transportation everywhere. Its vehicles, services and, most of all, our employees are what make Bombadier a global leader in transportation.

Bombardier is headquartered in Montréal, Canada. Its shares are traded on the Toronto Stock Exchange (BBD) and the company is also listed on the Dow Jones Sustainability North America Index. In the fiscal year ended December 31, 2015, Bombadier posted revenues of $18.2 billion.

How To Find The Top Luxury Yacht Rental CompanyRead the article
Best Vegan Proseccos UnveiledRead the article
Best Luxury All-Male Resort – Southeast USARead the article
Buenos Aires, an Impressive CityRead the article
The Complete Guide to Shopping for Shoes Online: Everything to KnowRead the article
How You Can Travel in Luxury While Still Earning MoneyRead the article
© Copyright 2022 AI Global Media Ltd. All Rights Reserved.
Privacy Policy | Cookie Policy | Terms and Conditions of Sale | Website Terms of Use
We use cookies on our website to give you the most relevant experience by remembering your preferences and repeat visits. By clicking “Accept All”, you consent to the use of ALL the cookies. However, you may visit "Cookie Settings" to provide a controlled consent.
SettingsAccept All
Privacy & Cookies Policy